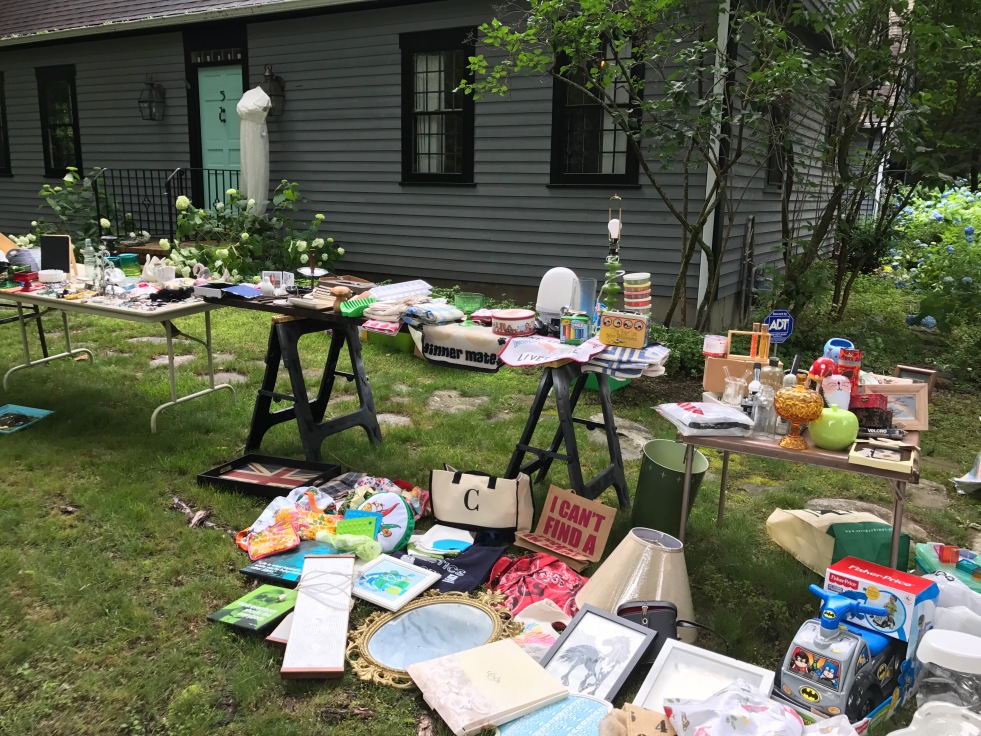 Have you ever had a tag sale?! (CT is the only place I’ve ever heard them called tag sales… everyone is every other state calls them garage sales, yard sales, etc- and looks at me with the crazy eyes for using the term ‘tag sale’ ha!) After our massive garage and basement clean outs, we decided to have a tag sale to try to make a little spare cash- and it turned out to be so much more than that! First off, we got to spend the day outside- which was so nice! We set up a few camp chairs, brought out a blue tooth speaker, and at noon, started having a few refreshing beverages! (Noon is the new five o’clock once summer hits, for those of you that didn’t know…) we hired a babysitter for a few hours in the am so we could set up, then when we sent her home, we spent some time hanging with them outside, then my folks came over and helped out with the kidlets! So it worked out nicely! Not only did Steve and I get to spend the day together outside, hanging out, chasing Dashel, letting Sailor play in the grass, etc, but we also made about $85, and we met a few of our neighbors! Even though we’ve lived in our house for about 4 years, we barely know anyone on our street- and it’s only like 8 houses! 🙈 so it was awesome having neighbors drop by and introduce themselves! It was a super successful day; we got rid of our junk, sold people some new treasures, got some sun, and played with the kids all while making some new friends! Not going to lie, it was hard work, the cleaning out of the house, the setting up, and the eventual hauling away to Goodwill if everything that didn’t sell, but it was well worth it! Have you ever had a tag sale?! Did you love it?!